Taking a guided tour of the Cathedral of Santiago and its Museum is still possible from its official app. Starting this week, all of its content is accessible for free! This has been the decision made by the Santiago Cathedral Foundation in the face of the situation caused by COVID-19. Today we speak with Ramón Yzquierdo, technical director of the Cathedral of Santiago Museum, to learn about those works that we should not miss. The app is available in Spanish, Galician, English and French!

The Cathedral is not the only Galician institution that is open to the virtual public. Another GVAM collaborator, the Museum of Wine, also offers this guided experience. The six routes that your app contains are not only oenological in nature. In fact, you will discover several connections with the patron Santiago and with Compostela. History, popular tradition and literature accompany us on this journey through the Galician lands and its five designations of origin. César Llana, director of the Galician Wine Museum, reveals several curiosities today. The information is also free and available in Galician, Spanish, English and Spanish sign language.

When we ask Ramón Yzquierdo about his favorite works from the Cathedral of Santiago app, he answered us like this: “I would stick with John Goodyear’s Altarpiece, an outstanding sample of the English Gothic alabaster workshops in which, through its panels, mounted on an original polychrome wooden structure, and with a particular narrative sense, one can glance through the five passages from the life of Santiago El Mayor”.

What is certain, César Llana points out, is that in no passage of his life will Santiago appear trying Galician wine. Production on these lands, as far as has been known, would begin later, around the third century AD. In the app you will discover the findings that show it. So… – we asked him – where does that popular legend come from that affirms that the apostle cast a curse on Galicia so that it would not give more wine? The director of the Museum of Wine points to the ingenuity of the rival wine producers from other regions in times past. 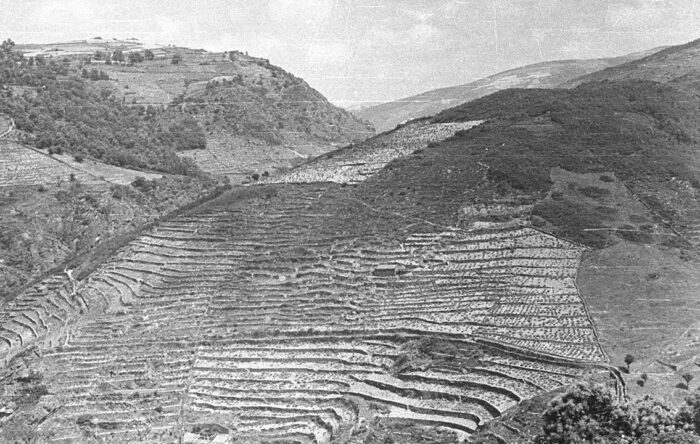 Recent excavations confirm the existence of wine production in the third century AD.

The second recommendation of the head of the Museum of the Cathedral is related to one of the elements which, he says, is also among the audience’s favorite ones: the reconstruction of the stone choir that Master Mateo and his workshop built, next to the Portal of Glory, for the consecration of the cathedral in 1211. “The ensemble was destroyed in the early seventeenth century and, based on findings and studies, a partial reconstruction of the work has been carried out in the Museum, which is undoubtedly one of its signs of identity and its main pieces”, Ramón tells us.

Already at the time when the stone choir was replaced by a wooden one, two minutes’ walk from the Cathedral was one of the keys to Galicia’s wine production: the Monastery of San Martín Pinario. The Santo André de Camporredondo wine farm, the current headquarters of the Galician Wine Museum, depended on this monastery. Santo André was the place of residence of the monk-farmer and his assistants. In Compostela, as in other places, “the religious received their ration of meat and wine almost daily, as this drink was considered just another food item” César reminds us.

Lastly, we asked the representatives of these two institutions how they are facing the temporary closure situation:

“In the Cathedral and the cathedral museum – Ramón says – work continues, as in all museum institutions, in the areas of research, conservation and dissemination of collections. For this, without a doubt, technology opens up alternative and very interesting fields of communication”.

For his part, the director of the Wine Museum tells us that they are facilitating virtual access to the museum rooms through social media. The app, he says, “will also be a fundamental element for those who want to prepare their visit to Galicia. The potential of this land regarding wine is still partially unknown. This technological tool is a path to knowledge, a window to the great wine diversity of this land”.

Without a doubt, the historical and thematic connections that can be found between both applications are wide and also diverse. We encourage you to find them by downloading the app on your iOS or Android device!

Geotours App: connecting the geoparks of the Atlantic coast

We use "cookies" (own or third parties authorized) to track Web browsing behavior. If you continue to browse and use this website you are agreeing to comply with and be bound by the following cookies policy